Lately I have been doing a lot of wedding makeup practice, because even though I think I'd like to have it done professionally on the day I need to know exactly what it is that I want. I think I'm going to be very fussy about it... Oh dear! I need to look my best but also need to look like myself, and feel comfortable in my own skin. So most of my practice runs have been some sort of smokey eye with Matt colours and no glitter. I love glitter but for some reason I just hate the idea of having disco ball eyes in my wedding photos.... I have no idea.

So here's the look! A brown smokey eye using colours from Urban Decay Vice pallet and Younique Addiction pallet no2. 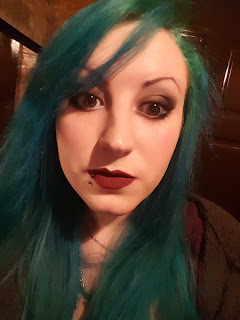 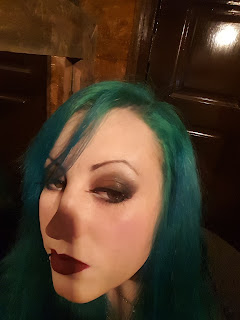 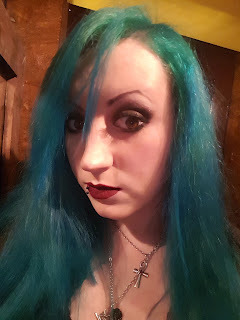 I remember as a young teenager always watching shows like LA or Miami Ink on a Saturday morning with my friends, and I couldn't wait to be old enough (and out of school) to be able to get tattoos and piercings and look like Kat Von D. I got my first tattoo booked a week before my 18th birthday and my best friend sketched it up for me. I've been pining after a sleeve tattoo for years, specifically of the Tim Burton aesthetic, and the  when the Alice in Wonderland film came out I knew that was what I wanted.

I booked the tattoo on Halloween last year and yesterday was my first sitting. I am so incredibly happy with it already and can't wait to see what it will look like finished, it's already better than I ever dreamed it would look. 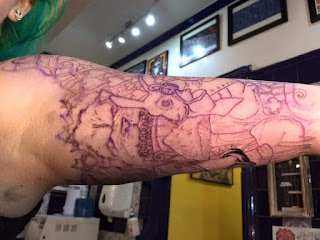 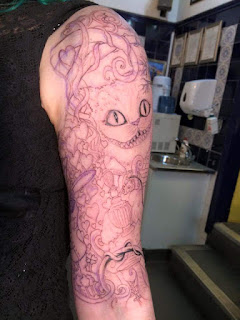 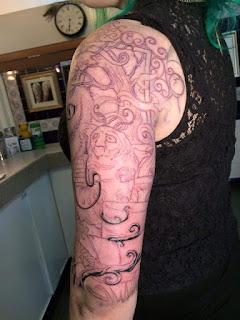 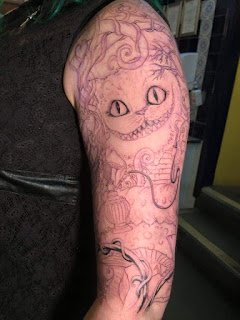 I had it done by a local artist called Ben Boston, he drinks in the pub where I work, he's a lovely guy and super talented. The sitting was 2 hours,  with 30 minutes to draw it all on freehand (except for the white rabbit which he stencilled) and then an hour and a half to tattoo it all into place.

And yes, it will be finished in time to ruin my wedding photos ;)
Posted by Lexington the 1st at 02:25 25 comments:

Proper English Tea etiquette: my way vs the High way

As I like to think of myself as quite the English Rose these days (albeit a spiky-thorny black one) Afternoon Tea is a most fitting passtime. What many people don't know, however, is just how many unspoken rules there are when taking your tea. Now I know most of them I don't feel I can ever take tea in public again. I've compiled a nice simple list for you so that you will behave most appropriately when attending an afternoon tea, as opposed to the most rude mistakes I have obliviously been making my entire life.


Just where do you think you are going?

Some say High tea, some say Royal tea. Some say three o'clock or four o'clock tea. If I am quite excited I will say we are having tea in a fancy voice, to indicate that we aren't just having a cuppa. In fact, just Afternoon tea is the correct phrase. High tea and Royal tea are popular with tourists, but high tea was only for servants, who would dine at 6pm after the upstairs had been given their Afternoon tea. So unless you want to be dining with the servants on ham and ale down stairs you'd best be calling it Afternoon tea, and if you're having Champagne only then may you refer to it as Royal tea. The best kind of tea is tea with alcohol obviously.


What on earth are you wearing?

I think most people know that the dress code is smart casual. Smart jeans or trousers and a shirt are recommended for men, and apparently it's the perfect excuse for a lady to dress up, as long as she's not in evening wear of course. Heavens! I'd usually be dressed to the nines in a corset and lacy blouse with a victoriana skirt, and probably some sort of headdress, looking most improper of course, but not at all scruffy.


How do you pour?

Personally, I pour my tea first after brewing it for as. Long. As. Possible. I like a builder's brew me. Ahem, daintily of course. And just a smidge of milk to lighten it. My MIL likes to put the milk in first and then the tea, which just makes for some milky ass tea all round. It's great if that's what you like, but apparently this practice is also wrong. Milk first marks you as a commoner because the milk would have to be used as a coolant before pouring boiling tea into cheap clay cups, thus causing theme to crack. Fine porcelain and bone China would not require such measures.

Sometimes I like to hold my pinkie in the air and pretend I'm posh, you know like you used to do as a child messing around? Wrong. Sometimes I like to hook my middle finger into the handle and act like a one handed professional tea drinker. Sometimes when I feel like I need a hug, or I'm cold, I feel that it is ok to wrap both hands around ones drinking vessel. Also apparently unacceptable behaviours, you know you are supposed to meet your thumb and index finger in the handle of the cup and try not to drop it. Right.

Rather than plopping in your sugar and frantically stirring until the tea splashes and your spoon has it's own clinky beat, one should consider sacrificing dissolved sugar in favour of a simple back and forth swishing motion from 6 to 12 o'clock. And for goodness sake, do not let your spoon touch your cup. NO LILLY NOOOOO!

I have a little stash of makeup photos built up so that I always have something to post about. This one is the look I wore on Christmas Eve to go shopping in, with that long black velvet dress featured in the outfit post with the belt. 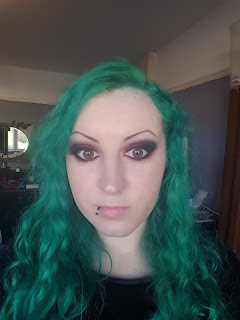 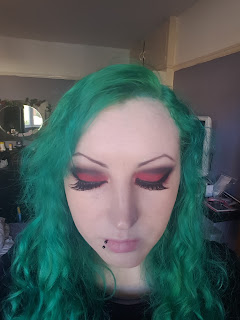 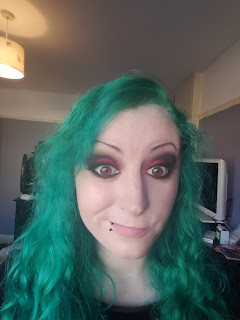 I used two of the Sugarpill pressed eyeshadows, Bulletproof (black) and Loveplus (red), with a shell-pink to blend out with and highlight my brow bone. For some reason I didn't wear lipstick that day, which I regret now because I think it would have looked better!
Posted by Lexington the 1st at 03:13 15 comments:

Outfit update on that belt you've been looking for

Just wanted to show you guys the final outfit I talked about on my previous outfit post That belt you've been looking for. I showed the belt and the dress separately and a couple of days before Christmas  I wore it out on a shopping trip and this is how it looked: 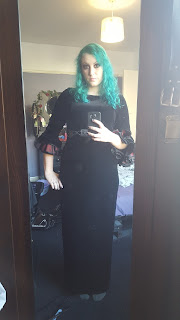 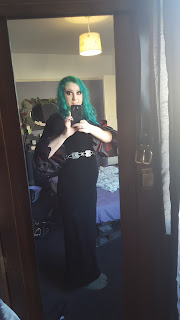 Just like I imagined. Woop woop!
Posted by Lexington the 1st at 02:11 5 comments:

Bring on the new year

It's finally time to come back to blogging now that the holidays are officially over.  I have missed writing but I do like to take a break from technology etc at this time of year, to just fully immerse myself in my friends and family and focus on the love and laughter around me. It was our first Christmas spent in our own home so it was a really special year for us, and we hosted a few people for dinner and friends for drinks later on Christmas day. I still can't beleive I managed to cook a roast for eight people and the only casualties were the three wine glasses I smashed when trying to serve prosecco. 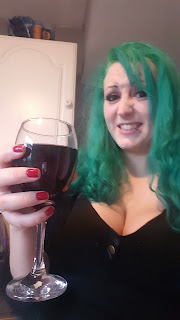 Reegan is finally understanding the whole concept of presents and unwrapping them, and after every gift she would demand 'open!' And insist that the toy needed to come out of it's packaging. We are usually quite minimalist when it comes to birthdays and Christmas with her though, for various reasons but she seemed to really enjoy her little green ride on tractor that her daddy picked for her.

After all the madness of food and family and presents, we drank even more and spent hours playing Cards Against Humanity. If you haven't played it then I strongly suggest it, it's hilarious and very offensive at the same time. Perfect for our bunch. New years eve was spent with a friend and her boyfriend, our first proper couple friends who we tend to double date with often. We ate cheap party food and played Settlers of Catan,which I haven't played in years and since I was the only person present who had played it before and couldn't remember how to play properly it took us about two hours to really get into it. We did some small fireworks in the garden and even though poor Inca was safely locked in the front room she had a bit of a panic and tried to dig under the Christmas tree. It's odd because she's never had much of a problem with fireworks before (hot air balloons are her nemesis) she also calmed down pretty quickly when the last of the neighbourhood fireworks finished.

So now that it's all over I'm diving headfirst back into wedding planning because our wedding day on October 1st is looming. So far I have left to book a marquee, a bar, the food and then just DIY bits and bobs for decoration. We also have to save up twice as hard because we could be faced with eviction in September if we don't have the money to buy the house we are living in. So it's all stressing me out a bit at the moment. I kind of wish we could just skip straight to the wedding and be done with it.

I'm starting a new tattoo this month though so I have that to look forward to. Happy new year everyone, who's ready to take on 2016?
Posted by Lexington the 1st at 02:50 6 comments: