So I thought I would post some update photos on my Alice in wonderland sleeve tattoo, of the last two sessions because I didn't post about it the last time. The main reason was because normally the artist takes the photos when we finish for his Facebook page, and then I just save those for my own purposes, and last time he didn't take any because there wasn't too drastic of a difference that could be seen since the last time because a lot of the session was spent doing black shading between the hearts and a bit of colouring in the tree branches and mushrooms.  First I show you a before picture from the second sitting. 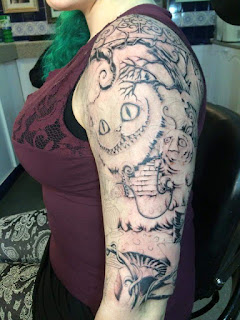 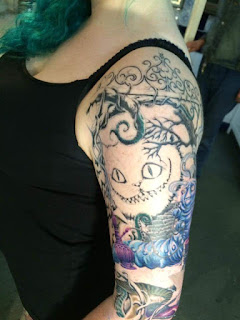 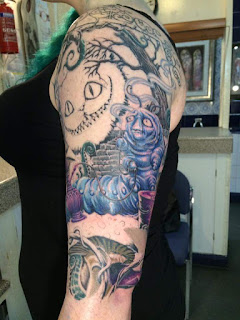 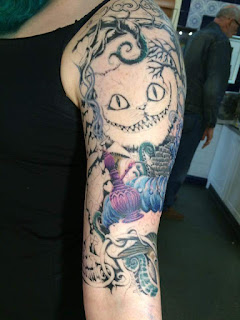 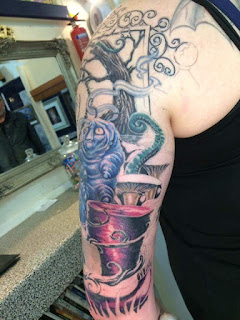 I'm more than happy with the way it's going, even on the first sitting it was better than I could have ever imagined and it just keeps on getting better. It's funny because this time around Rob had to work so I was there on my own (Rob normally comes in with me even though he gets bored, he just really likes being in tattoo shops because it's such a familiar atmosphere for him, ha) and I really enjoyed it. It was two hours that were purely self indulgent mummy time, spending money on myself and getting to just sit there happily swimming in my own thoughts. I think the hair metal Ben was playing definitely lifted my mood though... lol. I just really enjoyed the sitting this month. Anyone else out there find their pain place a nice head-clearing place to be?
Posted by Lexington the 1st at 15:12