Colourful hair is a lifestyle choice. 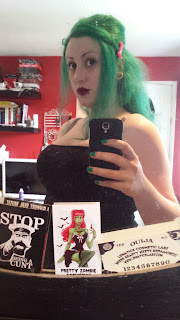 So I wanted to write a proper post about having brightly coloured hair. I did write a post about my hair journey before, so check that out if your interested  (also you can laugh at old embarrassing photos of me!) But I have never really spoken about the impact my hair choices have made on my life. Whenever I talk about it with people, I always tell them that having *instert current colour here* hair was a real commitment and a definitive life style choice. Aside from the obvious risk of damaging your hair and possible DIY disasters, you do put some things at risk when you choose to go bright.

Firstly, when you want to go a very bright colour, you have to take the time to bleach it at least once all over (for me three times) and then commit to having your roots bleached every inch or so. This is unless you naturally have very light hair, if so, I'm jealous of you! But for me this is maybe every 8 weeks or so. Once you are bleached, you have to colour it several times in order to attain a really vibrant tone, if you only do it once you will probably be very disappointed with a mediocre or worse result. I have had so many people tell me after bleaching they coloured it once, it looked crappy and they had "ruined their hair" and almost immediately went back to their previous colour. You just have to have a little patience. After that you might have to dye it every single week to maintain it. I only dye mine every other week now, but I also only wash it twice a week at a push. I also have abandoned my hair dryer in favour of gentle natural drying (my favourite way is to wear pigtail plaits when it's wet, the next day it's soooo mermaidy) and I straighten my hair rarely. Heat styling will further damage my hair and fade the colour  ( as will sunlight. Hiss!)  My hair also bleeds colour when wet, so I wear a hairband on my hairline for exercise, I don't swim, and take my own towels when I know I will be showering away from home. My bed linen and pillows are also stained, so I always take spare sheets or pillows as a guest when I stay somewhere.

Unfortunately, as we all know, being unconventional can also affect our careers. When my old boss got wind of my plans to go blue (back when I was brunette) he threatened to fire me if I went ahead. I was on a zero hours contract at the time and he was pretty crappy to most of the staff, so shortly after this I quit in favour of the pub I work in now, the manager was my boyfriend's friend, and he offered me a job regardless of my appearance. Although at the time he had super long hair and a beard! But the kind of atmosphere at our place is very laid back and casual, we are a locals' pub and every one knows us. We never even had a uniform until a month ago, and even so it's only a t-shirt and we aren't forced to wear it. Sometimes I think about what I might do if I ever had to get another job. It's a difficult one because I really don't agree with judging someone by appearance  (as long as they don't look scruffy that's what matters) and if someone didn't want me to work for them because of how I look then I wouldn't want to work for them anyway. But my opinions on work and careers are another subject entirely.

There are also people's opinions to contend with. As I have said before, I normally have nothing but compliments from most people when it comes to my appearance. You get the snarky "it's not halloween yet" comments every now and then, and there's the people who throw me a patronising back-handed compliments about wearing skulls and bats in my hair. There was this one guy who used to drink in the pub where I work, and he would always get drunk and give me the same speech about how much prettier I would be if I was "normal" and his daughter also went through this stage, she had red hair and her nose pierced you know. It was funny because I would just nod and smile along with him, and then the next time he came in he would have forgotten all about it because he was so drunk, and would proceed to give me the speech all over again.

When I went to pick my four year old sister up from school (situated in a quintessentially English village by the way) all the mums were pointing and whispering behind my back. The mother of my sister's little friend was the only one who had met me before and indiscreetly went around the playground proudly dishing out the juicy gossip surrounding us.

But since we announced a couple of months ago that we are getting married my hair has become a hot topic once again even among close friends and family who have long since become used to what I look like. "So, will you have green hair at your wedding??"
"Are you dying your hair back before you get married?"
"What colour is it going to be for the wedding? Not green surely?"

It's like just because I'm getting married I am expected to suddenly become "bridal". My leafy coloured coiffure is some how not deemed feminine enough for the mainstream ideal of how a bride should look. Even those close to me have questioned me, who outwardly seem accepting of my colour when to begin with they thought that green was an ugly colour choice. It's  as if to say, "Well this green haired stage you're going through right now, that's all very well and good but it's not really a suitable choice for a wedding is it? I mean you've had your fun with it now but you should pick something a bit more sensible for your wedding dear."

Honestly I don't know what colour it will be when we get married next year. I've been feeling like a change for a while now, so who knows!

Anybody else had these sorts of opinions to contend with? How did you handle it?
Posted by Lexington the 1st at 03:57