Just a quick update to tell everybody that we are finally in. It has been one of the most physically and emotionally draining weeks of my life. Second only to when my daughter was born. I have been yearning to write about it all week, but I either haven't found the time, or when I find myself with a free hour or so I just want to switch off and chill out. We did all the moving on Sunday and by about 5pm that day I hit this wall of exhaustion and pretty much just shut down. I was able to take care of Reegan and that was all I could do without just passing out.

There's still boxes and crap strewn about the house, but it's MY crap, and it's in MY house, which in itself makes me feel so much better. For the past three years Rob and I haven't had anywhere stable to call home, so my life has been packed up into boxes and scattered amongst various family members's storage spaces. I have found a new level of peace from knowing that we are here settled and all of my crap is sitting under one roof here with us rather than worrying about finding this or that from who's spare bedroom etc.

We are having our first social gathering at the house this weekend. It's a kind of freedom I haven't felt for a long time, because you can't invite people over to visit an already crowded house which isn't even yours. I used to feel so isolated not being able to have friends and family over, especially after having a baby so young when most people my age are out partying. Before we had our daughter Rob and I both worked Friday and Saturday nights so I was never alone. I only work two days a week now and not those evenings because Rob does and it's hard to get childcare all night long on a Friday! 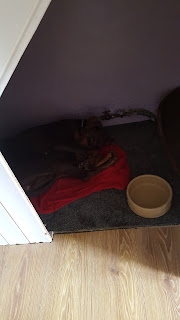 Whilst Reegan hasn't settled in yet and has been very hard work, our dog Inca has made herself right at home in her new bed under the stairs. Surprisingly well actually considering how she is still recovering from a little accident last week. She caught one of her claws in her cage when she was running in and out and ripped it clean out of her poor little foot. It bled heavily and we had to take her to the vets for emergency treatment. It was so bad they sedated her and cauterized it, but luckily she got to come home that night. The whole thing was pretty distressing and I nearly lost it but I'm proud that I managed not to have any tears, and Inca was back to her usual greedy self the next day. We are now waiting to see if her claw will grow back or not.

Here's some new house pictures to nose at while I get things looking pretty enough to take more!

This is our window storage box, which we have since stained dark oak and added black ornate hinges to the lid. 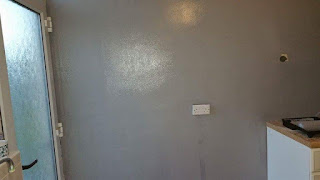 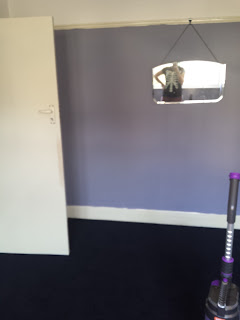 Our bedroom colour, which does NOT look like it did on the tin. At first I hated it but I've warmed up to it now. 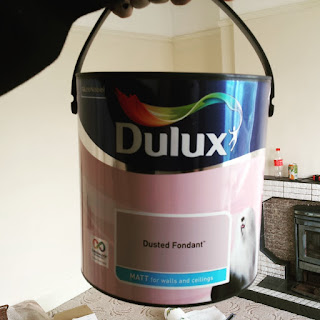 Finally, my controversial living room colour choice.  I love it, and Rob got his 48" TV he wanted, so we're even!
Posted by Lexington the 1st at 15:48