Running away from me

I don't know how it's suddenly almost five months through the year, but here we are. Time really has run away from me ever since we moved into our own place, probably because I'm feeling more contented and fulfilled in my life than I ever have before. I do have a lot on my plate still, and obviously life isn't perfect, but as I like to say about my Sunday roasts it's a constant evolution towards perfection. My own peculiar perfection that is.

Already the puppies are five weeks old and in only three short weeks they will be leaving us. The thought of letting them go fills me with so many emotions. Ultimately, I will be sad to let them go because I love them all dearly, but we are happy to have found nice families for their forever homes. They have all come into their own personalities so much the past two weeks or so, to the point where when two of the girls aren't wearing a collar I can tell them apart by personality alone. Well, I can because I know my babies better than anyone else does! Poor Inca has had enough of playing mummy now, they are almost fully weaned and she only spends time with them at night (although if she can drag her bed out of the puppy pen she will!) and when they go outside together she has started to show interest in playing with them. As soon as they go for her nipples she doesn't want to know and makes a quick exit. 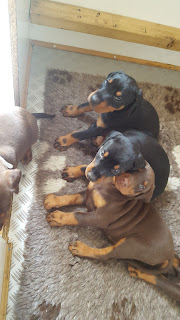 The beginning of April marked my 22nd birthday, which actually I wasn't all that enthralled about. I felt like it was crossing a line into true grownuphood  (yes I made that up) and I don't think I like it! 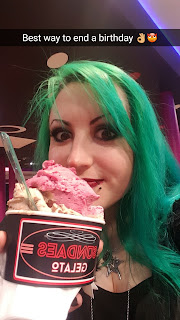 This week we had a meeting with two wedding vendors about the food and the marquee, which has made me feel a lot better about how close the wedding is getting. October 1st is looming and by the time Rob and I are married we will have a two year old daughter. Reegan is only just 20 months now but she just seems insanely grown up all of a sudden. Her vocabulary is expanding daily, her sponge like little brain learning new things constantly. She can count to twelve on her own, and grasp concepts like the weather and communicate her feelings about it. Example, "Raining mummy! Stop rain! No! No rain!"
I was having a bit of a mood swing the other day and when Reegan saw me crying she said "Sad!" And gave me a hug. Needless to say that was all I needed to cheer me up!

Funny story, we took her to the amusements when we were on holiday, and when the whack a mole game thing she was playing finished she said "Ah fucks sake!" Completely of her own initiative. We do try to mind our language around her but nobody's perfect! LOL. 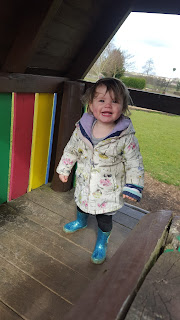 I'm really enjoying parenting a toddler now, but having such an independent child is tugging on my ovaries a bit. I'm really wanting to have another baby soon, but we are set on waiting until we are married now, for a few reasons. I have a friend and a family member who have both recently had babies and it's making my broodiness so much worse! I joked when the puppies were born I was going to start lactating again. Maybe it's the lovely fertile spring behind all these feelings? Who knows!
Posted by Lexington the 1st at 13:30