I certainly had an exciting time this past weekend,  because it was both mine and Rob's 3rd anniversary, and he asked me to marry him! It was funny and confusing because he has been talking to friends about planning it for a while now, and before we had Reegan we were planning a trip to Iceland and I think thats where he was intending to propose. He was also planning to ask me on Sunday when we went out for our anniversary dinner (more on that in a moment) but he thought one of our friends had let the cat out of the bag, so he proposed on Saturday to still surprise me, but I didn't even realise he was going to in the first place! So all a surprise really. Saturday afternoon we took Reegan and Inca (our dog) for a walk to Blaise Castle estate and walked up the big hill to the castle.


As you can see, it's tiny, and you can't go inside it because it's a grade two listed building, except on the special open days, which don't happen often. At the estate museum there are pictures of what it looked like when in was completed in 1798 as a sort of summer house that the owner at the time used for entertaining guests. It was beatufully decorated in the gothic revival style and even had a kitchen in the cellar for dinner parties.

Anyway. We got up there and Rob suggested we sit down as if he was tired, so I said sure why not, and bent down to get Reegan something to eat from the pushchair basket, and turned around to see him on his knees holding out the ring.


I couldn't quite believe he was really asking me and I just stared at him for a minute and I think I asked if he was joking. My heart stopped and I felt all fluttery and dizzy and I just couldn't process what was happening. How dramatic! But of course I eventually said yes, and off we went to the pub where our friends were waiting with a bottle of Prosecco. 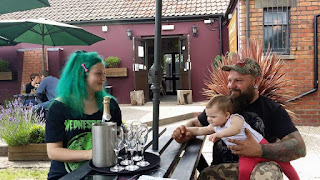 Then on Sunday we went out for dinner at a place called Steak of the Art, which is a steakhouse/art gallery, it was super cool and the food was lush! (Imagine me saying that in my West Country accent.) 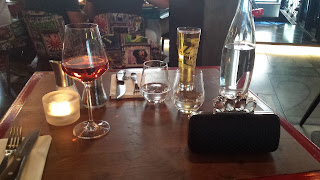 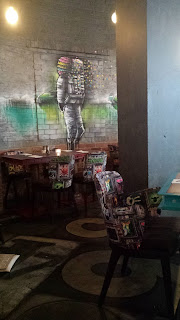 The style of decor was very modern and industrial looking, so not entirely my cup of tea but it was still very fascinating to be surrounded by so much art. 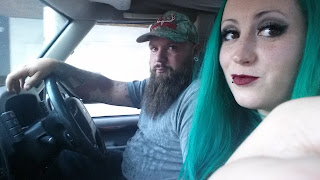 Sorry for the overload of smug couple selfies. The last two are mainly so that you can see my makeup in more detail, which was a grey cut crease shadow with a feline flick and my trusty red lippy. I'll  be off to work tonight so happy Monday everybody! :)
Posted by Lexington the 1st at 05:00