As promised, I am posting a how-to for the fascinator I wore to the Mad Hatter's teaparty last week. With a just two rigid elements already at my fingertips, some cardboard and a whole tube of superglue, here's how I did it: 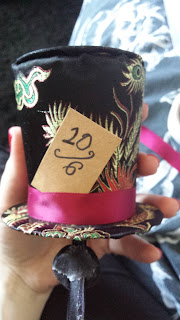 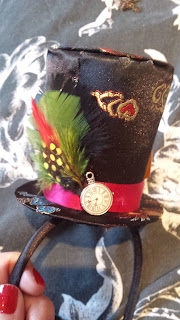 What you will need:


So firstly I removed the label from my detergent bottle, marked the desired length, and used a serrated knife to cut the bottom off (the bottom is the part we need). Make sure you cut off slightly more than you think you want, just in case. 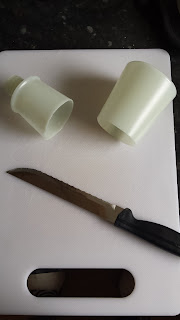 Next, I made two circles from cardboard, one slightly smaller- to glue to the top- and one slightly larger for the bottom, which will be the brim of the hat. After this step, it is time to cover all of your parts in your chosen fabric, which is where you may need to do some experimenting. Don't just go straight on in there with your glue, because (as I learned, thankfully on a practice piece) your glue may just soak straight through your fabric and leave an unsightly sticky splodge when dry. So for the plastic part I wrapped it completely in double sided tape, with each piece on a slight diagonal slant, making sure to overlap so that the fabric adhered to the plastic the whole way around. 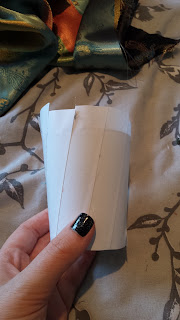 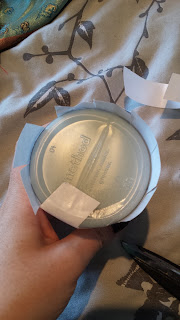 I then folded the excess tape over the top and bottom edges before peeling off the non-sticky coating and rolling it carefully across the fabric to stick it down evenly. 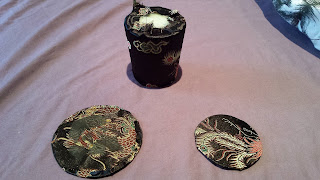 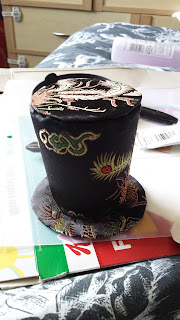 The next part was somewhat tricky, and to glue the top disc to the hat I used copydex in the middle, and then went around the whole edge squeezing superglue into the gap and holding it down until it was dry, I did this about an inch at a time and had to squash thr whole thing down firmly throughout whilst trying not to get superglue on my skin. But the results were good because it pretty much closed the gap and made it look neatly finished. To attatch the bottom disc, I used some tape running from the inside of the hat body and folded it down at the bottom to secure it to the disc whilst I used the same superglue-the-gap-and-press method as before.

Once all of the glue was dry and sturdy, I decided to decorate straight away as I only had a few hours to go until the party and had to get it done. So I used glue dots at either end of my red ribbon to secure it around the bottom of the hat, and made sure to line up the join of the ribbon with the join of the fabric so that my embellishments would disguise them. I used another glue dot for the feather, another for the pocket watch on top and went in with some more superglue just to make sure.

Luckily I already had an alice band covered with black satin, or I would have had to make one to match myself, and used another small disc of fabric covered card to stick the hat to the band, but this time it was oval shaped to ensure maximum surface area for gluing. After gluing the disc to the alice band, I used a needle and thread to stitch it on for further stability and finally glued it onto the hat (with yet more superglue). 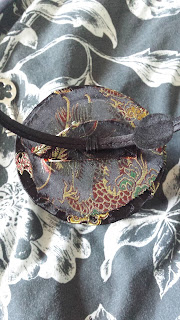 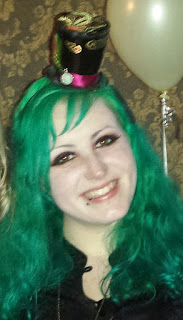 Tada! This is the only closeup I could get of me wearing it so sorry it's so blurry. Anybody else tried making hats before? How did you find it?
Posted by Lexington the 1st at 06:34