So this week's look is equally about hair as it is about makeup but I didn't think anyone would mind! It was a very red look, as I incorporated the colour into both my eyes and my lips, and as my hair was relatively straight and smooth I thought I would try a twin buns hair style. 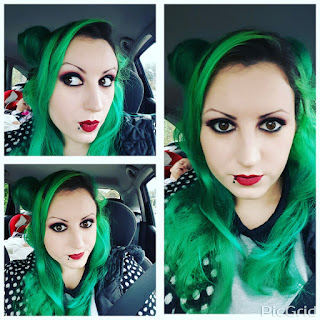 As you can see, I sectioned the hair into top and bottom layers and put the top half (excluding fringe) into pigtails, which I then wrapped around my small bun inserts. I felt like my hair looked shiny and healthy that day, but it's still so thin that I had to back comb it to make sure the bun inserts were covered up completely! I don't think my hair has completely recovered from post natal hair loss yet... hahaha!

For the makeup I used my usual Vamp matt lipstick from Pretty Zombie, with black eyeshadow on the lids blended out to red. I also got a new foundation from Lancome, which I am seriously obsessed with so I might write a review on that later. In this look I'm wearing a new pair of false eyelashes that I got from a UK website called False Lashes UK, but they are Red Cherry lashes imported from the US. I have heard of people on YouTube and such recommending these and seeing as the website I got them from were so cheap and had free postage I thought I should try them.  Plus I needed a couple of new pairs because I'd gotten rid of some older heavily used ones recently.

I purchased two pairs, numbers 43 and 218, in this look I'm wearing 43 but both pairs are fairly similar. 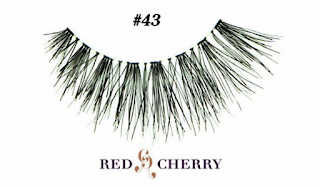 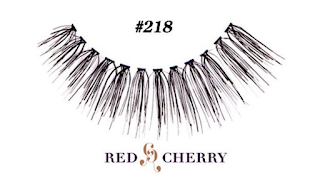 What I love the most about them is how comfortable they are to wear, which is because of the style of the band, which as you can see is very thin and the lashes are attached in small sections rather than all the way across. The thinner lash band means that the strip is much more flexible and therefore easier to apply, so you can glue it closer to your natural lash line which makes them bled in and look much more realistic. Because they are also real hair they are not shiny and plastic looking like some false eyelashes, which I really hate the look of. I like to try and find that balance of lashes that are long and shapely but naturalistic at the same time. I would really recommend these to someone who is new to false eyelashes or isn't very confident applying them because they are so easy and comfortable. Also to anyone who lives in the UK the site is well worth buying from because they were only £3.50 each with free postage. I haven't stopped wearing these since I bought them... That's how great they are.
Posted by Lexington the 1st at 12:22