The puppies are here! A first time breeder's experience...

As most of you know, we (well, fh decided to really) made the decision to breed our Doberman bitch Inca finally. To be honest it's something we have been considering for a couple of years now, and since she isn't working anymore (who knows we may start again) it seemed like a good time. We waited months for her to come into season (by normal standards she was due in October but she seems to have a longer cycle than most) and she finally came into season in January. We found a lovely stud dog to mate her with and she happily obliged (lol).

So after five weeks of waiting we got her an ultrasound scan last month to discover four perfect sacs each with a wriggling puppy bean inside. Little did we know there were three more hiding in there! She's been behaving like she might go into labour since last weekend and every night last week we went to bed betting there would be puppies by morning, so Monday morning I really wasn't expecting it to happen because it was daytime. We were just pottering about our daily activities and I popped my head into the dining room where we have the whelping box set up, and there Inca was with a look of terror on her in her eyes and the head of a puppy protruding from the birth canal. So I instantly went to sit with her and made a hasty phone call to Rob to come home immediately, I was shaking and adrenaline was pumping! It took a further ten minutes for Freyja to be born, and although Inca cleaned her up quick and nipped the umbilical cord she wasn't that interested in her until puppy number two, Helga, was born. Then she had a little while snuggling with the two of them until she was ready to birth the next pup.


Then Ziggy came along, another black female, with a tiny bit of meconium staining coming out with her waters. I was a little concerned until two hours later puppy four, Odin was born breech. So that explained the longer gap and possibly meconium so I felt ok that he was born safely.  Unfortunately I was not prepared for the devastation of the next male, Bjorn to be born dead. It was awful. He also came out breech and I had to gently help him come out as he seemed slightly stuck. As soon as he came out, his mouth tongue and nose pale and white, we knew he was gone but Rob still tried his best to revive him. He wanted to bury him immediately but I didn't want to bury him at all. I sat there cuddling him on or kitchen floor, sobbing, trying my best to love him as much as I could before he had to be buried. I just needed to feel like the tiny pup had experienced some sort of love before we laid him to rest.

After Bjorn came little Lagertha, the brown runt of the litter. We were surprised for her to be born because it had been another two hours in between births and we were starting to wonder if she had finished. Suddenly though we noticed more contractions and suddenly she popped out like a little furry lightening ball! Another twenty minutes or so later and the seventh puppy Ingrid was born, also quite quickly with only a couple of pushes. 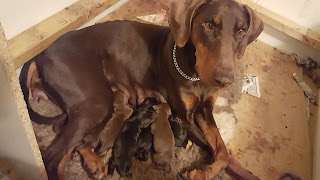 I have to say, I'm feeling quite proud of Inca, for birthing seven puppies in as many hours, with a relatively straightforward labour. She stayed relatively calm and quiet throughout the whole thing and as you can see from this photo she was positively glowing.

We had some teething troubles getting her not to sit on the puppies and crush them, as well as some gentle encouragement to feed them because she's the type of dog that prefers to curl herself up into a ball to sleep. For the first two days we supervised them all almost constantly and it was bloody exhausting, but gradually she has been getting better. Until this morning when we came down to find poor lifeless Freyja had been squished. We had been up with Inca several times in the night and thought she was doing OK,  but accidents do happen I suppose. I just can't get over the guilt of feeling like we could have done more to prevent it. We buried her next to her brother Bjorn without Inca noticing.

So evidently it has been quite the emotional roller coaster for us the past four days or so. I'll post more updates soon if you guys would like that.