Sorry I haven't posted much at all lately! June and July are and will be very busy months for us, we have been out almost every weekend and will be for probably the next six weeks yet. It is good though, all the socialising is helping my state of mind greatly and I'm  feeling nice and normal, almost my own age again... ha! This weekend is also Download festival, and the first time in four years that I haven't been, even though we only went for one day last year because I was so heavily pregnant at the time. It was strange not to be there, and if we weren't so busy I might have been sad about it. I think we might go next year though so I'm quite happy with that.

The reason we didn't go to Download festival was because I had promised to take my twin cousins to see Enter Shikari on friday night and they needed me to be their "responsible adult" because it was a club venue and they are only sixteen. I was actually really looking forward to it because I used to listen to that band a lot when I was younger. Unfortunately for us though the gig got cancelled, because one of the band members had been to hospital for some reason that morning so obviously unfortunate for him too, but the shitty thing was that the gig was cancelled at the very last minute, because the venue had already opened and started letting people in before the cancellation was announced. We didn't actually find out until we got there, so the boys went home (although I promised to take them to Download with us next year to make up for it) and I went to the pub because I had a babysitter until the next day and I couldn't bear to go home alone with Rob out at work! Some friends and I went to a couple of pubs before going to the club where Rob works and partied all night long. It's called the Bierkeller and friday nights are "Psycho Keller" which ia basically just a rock/metal night. We got excessively intoxicated and it was great. I have fully stopped breastfeeding now and with Reegan taken care of for the night I could really let my hair down, something I haven't done in a long time! I only have a couple of very rushed outfit pictures so apologies for the crappy quality! 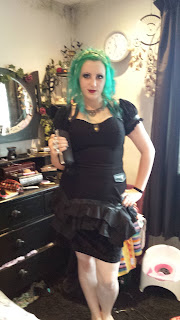 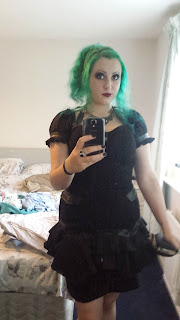 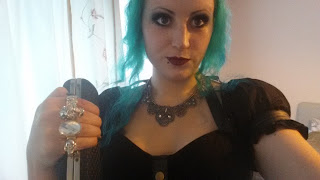 After thinking that I had absolutely nothing to wear I ended up with a completely new outfit, although technically not new because it's been sitting in my wardrobe untouched for a while. I got the dress (although its very short and I wore a velvet mini skirt under it) on sale from Necessary Evil back when I was pregnant because it was a steal and just crossed my fingers that it would eventually fit me. Luckily it was perfect and super comfy! The huge collar necklace was a birthday gift from my auntie that I hadn't yet gotten the chance to use, and my tiny knuckle duster clutch was a Christmas present from my mum that I also hadn't used. Win all round!

Saturday morning we had to drive almost two hours to my  mum's house to pick up Reegan (normally it only takes an hour but the traffic was awful) and have some lunch with my gran and little sister before we made our way back to Bristol. I had a nice chilled out evening with my daughter whilst Rob went out to work again and played Sims when she went to sleep.

Sunday we went out with friends to the Bristol Tattoo convention, and I do believe it was the very first one. It was a fun day out because we started at the pub where I work, got the bus for the short ride into town for the convention, and then had food out before we went back to the pub again. In the end we were out for about seven hours and Reegan did very well considering she spent much of it stuck in her pushchair, but when we got back to the pub we let her play in the garden to let off some steam. Then we had to have a bath when we got home because she was totally caked in mud. But very happy. She really enjoyed being the centre of attention all day and I'm so glad we went.

Here are some pictures of prints we got from a guy called Marcus Jones who had a stall at the convention; Popeye because Rob loved him; Wednesday because we both loved her; Frankie because I am obsessed with him, and his bride because we couldn't separate them! They are all such amazing works of art and when we actually have our own place they will be proudly on the walls. 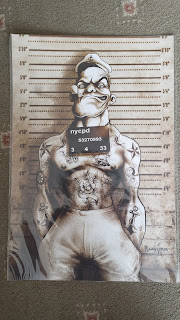 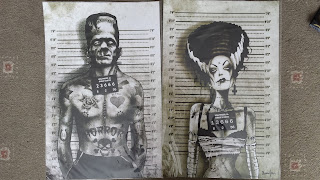 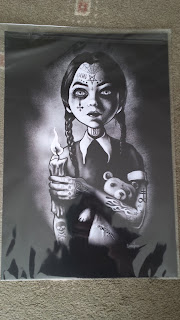