So last weekend  we went on our first family camping trip, just the four of us. The baby, the dog, me and the Protector of our Realm. Rob and I used to go a lot before Reegan was born and our dog Inca would usually sleep in with us and steal all out blankets, but she had to sleep in the car this time because she is in season and we were worried about her squishing the baby in the night. It was also the first time we used our new tent, a four man standing height that has inflatable tubing rather than poles. IT WAS AWESOME. We got it as an investment, so that we could have affordable family holidays for years in it and the fact that it's inflatable meant that Rob could assemble it in about five minutes just on his own whilst I entertained the dog and the baby.

We went to a place in Devon called Park Farm, and it was a really nice family campsite with lots of animals and lots of random trampolines everywhere. Really great for kids and the grounds were clean and well kept and the facilities were lovely too. 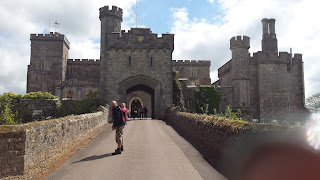 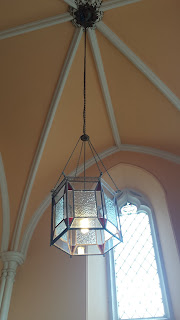 On the second day (after I spent the first day collecting leaflets, because I have a notorious obsession with them) we decided to visit Powderham Castle, because it was only half an hour away from where we were staying. It wasn't huge, but it was very beautiful. I managaed to take pictures outside, as you can see from the lunch we enjoyed in the Castle courtyard, but due to their insurance policy you are not allowed to take pictures  inside and you can only take the guided tour, no tour guide:no entry. The castle belongs to the Earl of Devon and I think it was his son or grandson that was just moving back in with his family that day. I have never visited anything quite like it, our guide was very friendly and relaxed, and had lots of audience participation with sending children to find the secret doors and such. Every room had a story and there was so much family history surrounding it all, you really do feel as if you are a guest of the Earl himself, with his family photos, portraits and heirlooms in every room. We were even treated to a little personal story from his son about a pair of haunted  sea shells he had recently placed on a shelf. I ended up taking the tour by myself whilst Rob spent time with our girls in the sunshine and I enjoyed it all the more because  of this. So sorry I can't show you any pictures  but if you're ever visiting the South West of England, south south I mean, then Powderham castle is well worth a visit I can assure you. It is also where the staircase scene from the film Remains of the Day, so if you have seen it you can imagine how incredible the rest of the house is.

In conclusion we had a short trip, but successful and wonderful and only the beginning of the many memories we will make together as a family.
Posted by Lexington the 1st at 14:55