So. I have been planning this post literally  since  about January, and just haven't  gotten around to it until this weekend. The original inspiration was  Lime Crime's Serpentina, and I thought  long and hard about buying it after I bought one of the velvetines last year but because Lime Crime can be expensive  I didn't in case I ended up not liking the colour and never using it. Fortunately for me the cheap highstreet (but may I mention still cruelty  free) brand Makeup Revolution brought out their Atomic collection in October I think it was,  five 'brave shades' of highly  pigmented lipstick.

Their version  of the Green lippy is called Serpent. Original yes. So I used it as the starting point to build the look upon and ended up using pretty much every bit of green makeup I own. I also used Directions' Alpine Green the last time I dyed my hair  so it's  looking a bit dark and blue in places. 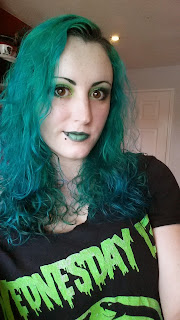 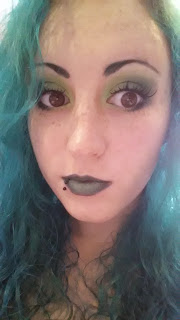 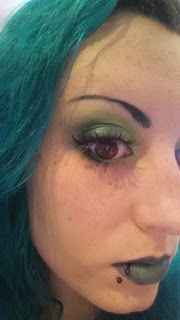 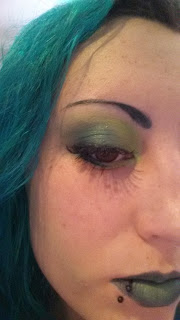 I started with an eyeshadow primer, and then used a light minty green for the inner corners. I then blended a deep matt green from the middle  to the outer corners and patted a shimmery green on top, also using the matt green for the lower lash line. Next I patted a very small amount of black onto the upper and lower lashline to define everything  a little bit, and blended white eyeshadow along my brow bone all the way up to my eyebrows. To finish my eyes I used my super spiky false lashes and mascara, and then foundation when my eyes were finished because I tend to make a mess with eyeshadows! I finished with the Serpent lipstick on my eyebrows and lips, and then patted the mint green shadow onto the middle  of  my lips for an ombre effect. Lastly I did a teeny bit of contouring with a medium matt green, although I don't actually  think it shows in the photos.

**Disclaimer: none of these products  were sponsored, I make these posts of my own free will.