So I've been a bit absent from blogging this month. Sometimes life just gets in the way I suppose. We are quite busy at the moment preparing for a litter of doberman puppies who will be joining us in just about 3 weeks or so, that's right, our dog Inca is confirmed to be carrying at least four puppies in her squishy belly right now! We took her for a doggy ultrasound scan last weekend, and straight away we saw four perfect sacs each containing a wriggly little puppy bean. So I can't leave the house too much at the moment because firstly she is very emotionally needy at this stage, and secondly because we have now adjusted her diet and she needs to be fed roughly every 3 hours during the day time.

The other issue I've been having is my wisdom teeth again. Last weekend the pain got really bad and I ended up not really eating for the best part of three days, so I had an emergency dentist appointment on Tuesday  (after being miserable at work on Sunday and Monday much to my co-worker's disappointment). I'm on antibiotics for my gums and cheek issues and I'm waiting for my referral letter from the dental hospital so they can hopefully take them out for good. Yay!

My latest tattoo sitting was this week also, as those who have me on Facebook will have seen. (If you don't have me on Facebook come find me!) To be honest, even though this time around was only a two hour sitting, normally well within my tattooing tolerance timescale, I found this sitting not so enjoyable. Not that being tattooed is ever that enjoyable a process anyway! I think just physically and mentally I was a bit too stressed out to deal with it this week. But enough of my moaning,  take a look at the progress! 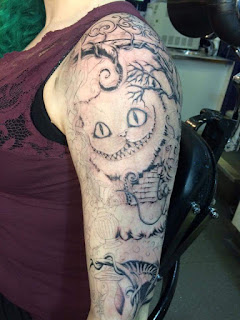 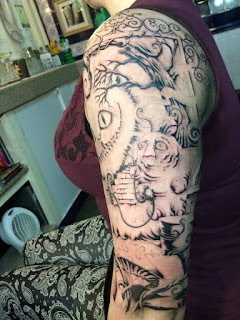 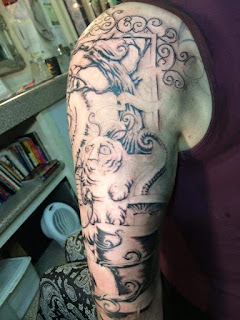 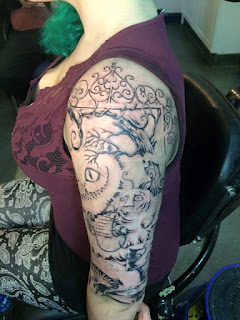 This sitting was just adding in some heavier blacks and shading on top of what was already there, but it's made a big difference to the detailing. Ben also took a couple of closer pictures of the inside of my arm even though he didn't work on it this time, but you can see the white rabbit and the bandersnatch in better detail in them.

There's another post I've been working on for nearly two weeks now, I'm aiming to get it out soon! Bye for now!
Posted by Lexington the 1st at 02:00